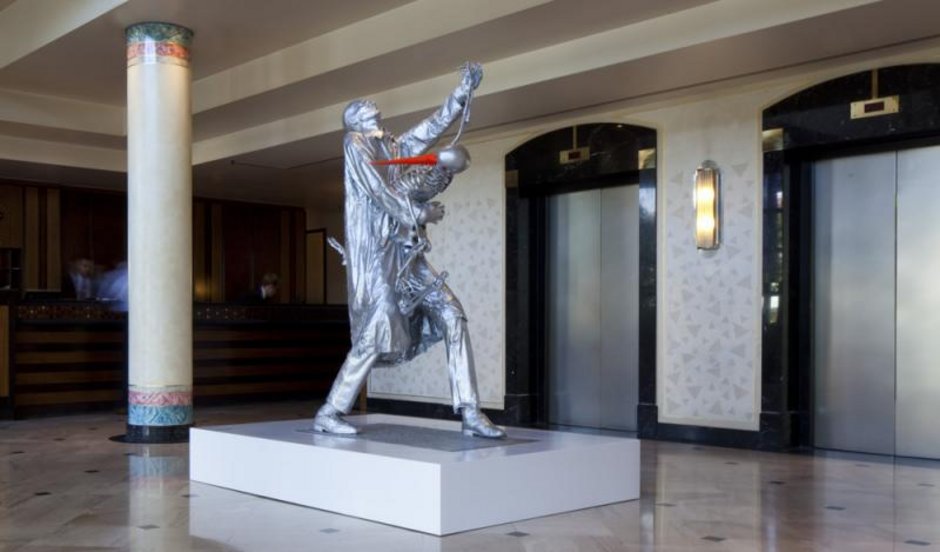 In her sculptures, installations, videos and photographs the artist Gloria, who has lived in France
since 1982, Friedmann is concerned with the relationship of Man to the environment, with socio-
political as well as ecological questions. She holds up a mirror to us, portrays the state of the
world using a variety of artistic forms, and warns us not to lose sight of our own transitoriness,
in an age of technological progress. Her work “Le Gigolo”, on display in “Blickachsen 9”, is
also to be seen in this context. Friedmann takes up the medieval pictorial motif of the danse
macabre, treating it – with great humour – as a contemporary theme. She conflates life and
death, in the shape of the eponymous gigolo and a skeleton, in this dance of the dead. Yet
in a reversal of the traditionally represented power relations, here the larger-than-lifesize
gigolo (the word actually means a paid dancing partner) takes the lead and, dancing with
his head held high, carries the skeleton figure with its green cardboard nose across the
parquet dance-floor. Contradicting the thematic of the death dance, the uniformly silver
colouring of this unequal pair seems to suspend time itself.