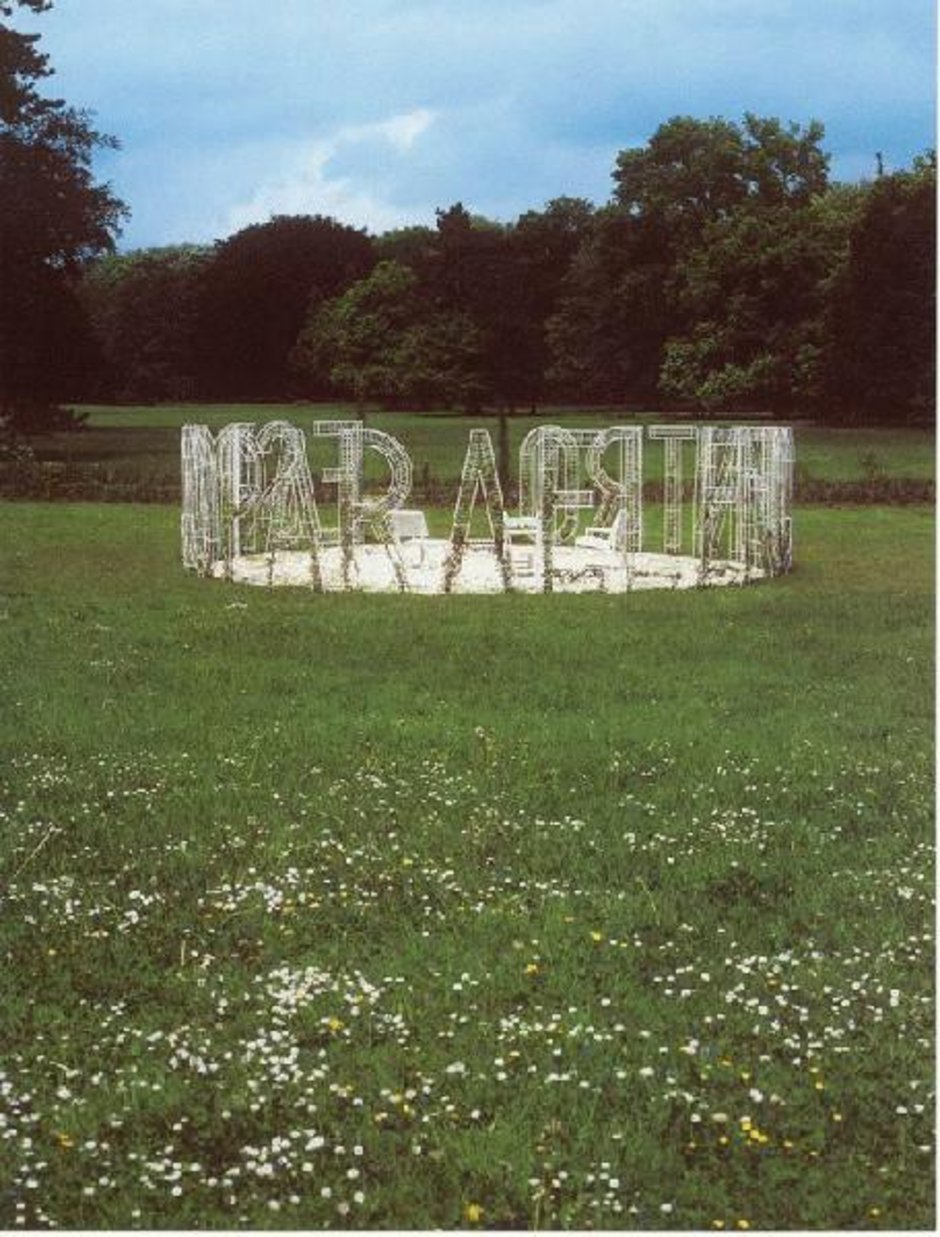 The best perspective on the low-lying circular installation of Calero's "Room for an Encounter" is looking from the pond in direction of the Jubiläumspark gardens across the street. The idyllic place with its entrance gate formed by two (still small) poplars was designed especially for the location. Two giant poplars are standing in the axis of the gate in the background like a magnified scene.

Inside a circle, carefully marked by white stones, three benches representing three eras (Middle Ages, Enlightenment, Modern Day) are set up facing each other. The space inside, the "Room for the Encounter", is surrounded by a delicate white iron fence. Ornaments in the lattice form the capital letters of the place's intention: "ESPACIO PARA EL ENCUENTRO". Newly planted tendrils are climbing up the iron bars and will grow into thick foliage in the course of the summer. Location and meaning merge in function here. Every visitor is asked directly to use the "Room" according to the motto of its title, to enter and dedicate himself to the word and the silence inside the permeable arena, like on an island.

The writing can only be read from the outside when walking around the place counter-clockwise. The inspection of the letters leads directly inside the room. The three benches serve for dialogue in individual meditation – of which we are reminded by the mirror on the right side – as well as in the encounter with others.

Suggestive letter images had been used before by Paul Klee and Max Ernst, Fabrizio Plessi or Ludger Gerdes, where sign and space, message and stimulus are unified. The circular, universal arrangement and the quotation of the poplar are just as significant as the letters in Calero's work. It is reminiscent of the poplar island of Ermenonville close to Paris where the gravestone (1778) of the famous French philosopher of the Enlightenment - Jean Jacques Rousseau - had already become a place of pilgrimage in the 18th century. Until his mortal remains were transported into the Pantheon in Paris (1794), the poplar island had been a real grave in the middle of a landscape garden. The sarcophagus is inscribed with the words: "Here Rests the Man of Nature and Truth". These are the terms that Calero is concerned with in his "island" of dialogue.