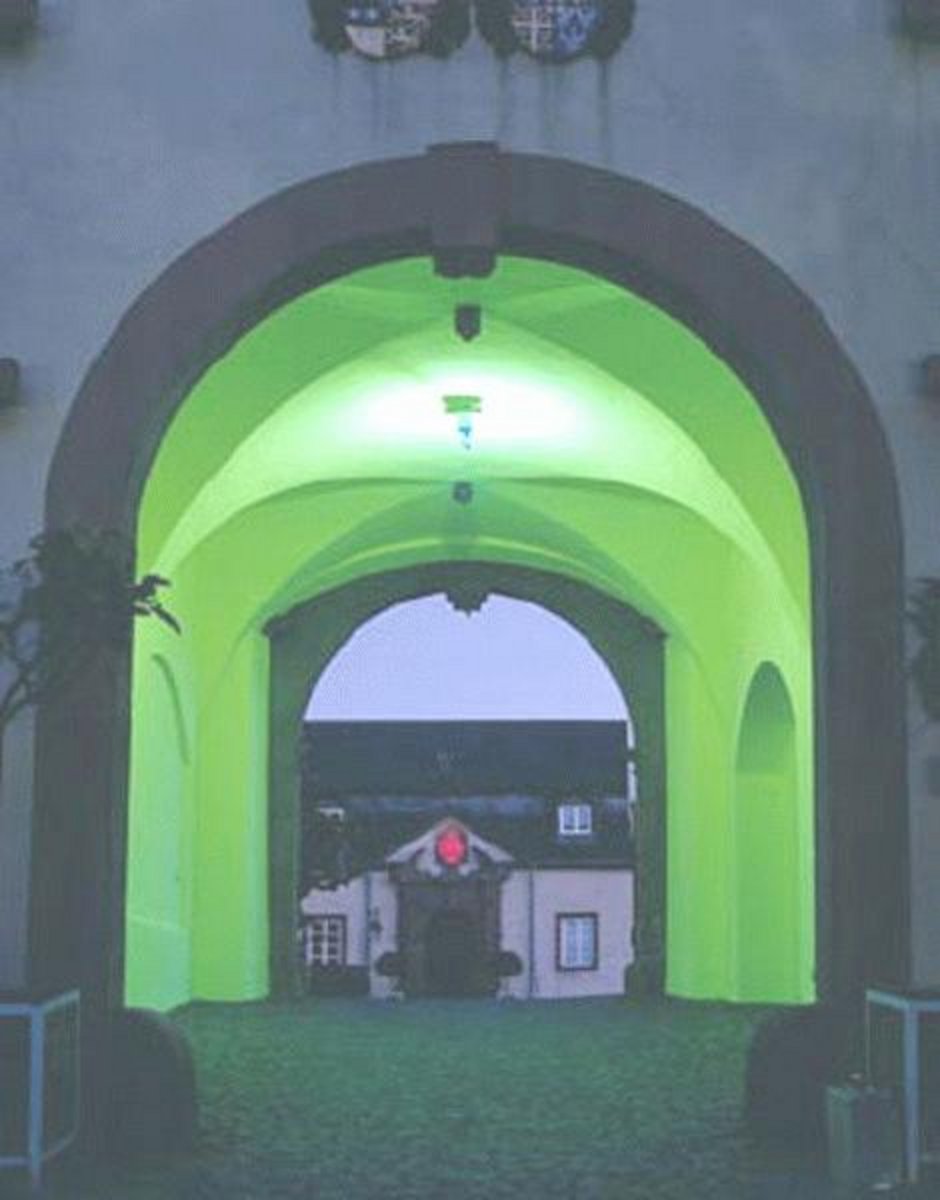 Born in the spirit of progress and technical realizability in the late sixties, "the art of light tubes, lamps and diodes came from the USA and conquered Europe … Beyond the realm of traditional forms of art it created an area, where high culture and everyday art, profane advertising messages and sacred healing lights, material existence and immaterial appearances, permanence and instability came together to meet in the diffused shimmer of inert gases" (Alexander Marzahn). Colour and light, architecture and space, have to melt into light spaces, if one wants to make every "axis of view" visible as in the time of the Baroque, which conventional sculpture and painting was not able to achieve. Thus, Goulbier chose black light as her tool to achieve every changing self-illumination and every adjoining "physicalness", which light installations can do uniquely since the time of Moholy-Nagy’s experiment: "to paint with direct light" instead of pigment.

The approach and valuation of the complexly built and often changed palace area of Bad Homburg took place, as always, without any great structural intervention. Rather, she seeks to correctively intervene using her medium of light, where, in the case of the original entrance, the axiality was given up for the benefit of purely functional deviation. On the other hand, she eliminates every piece of personified history using bold veils (the last Baroque bust of Count Friedrich II above the main portal), where, as far as she is concerned, the "light magic" of today would hesitantly meet with such pieces. The preserver of historic monuments and buildings, who lives here, must welcome this light design, as she herself works with such effects.

Goulbier rediscovered – despite all current interventions and distractions – the rising, original passage through both of the archways up to the dominating Prince Portal, as the stage or base of its own triumph axis: From the "dirt" and darkness of the street and the vault, the visitor is able to directly ascend, all the while maintaining visual contact to the focused target of the apotheosis of the palace lords. Ceilings and walls of the freshly painted archways illuminate in a consciously ashy, green accented tiredness. One is compelled to move forward by the (especially in darkness) effect of the phosphorescent green of the second archway. All other light sources have been removed from here (historical lanterns) and replaced with short wave black light bulbs. The walls and ceiling, with their fresh coat of paint seem to have sucked in the luminescent paint, in order to give off more light in the room. Instead of using the main entrance of today on the left, the visitor follows the suggested path of the artist straight ahead, where he is magically pulled along by the artistically lit row of busts of Counts that are completely enshrouded in tulle. This is not lit up by lurid spotlights, as was originally planned, but instead illuminated by special distant black light lamps that shine onto the busts from the top of the opposite archway. During the day, the enshrouded heads are lit up in lurid pink, at night this is joined by a green glowing design (from metal).

The "illumination" of the Counts heads with their own glaring light, by day and night, corresponds to the ceremonial, historical veneration that the rulers demanded, placed - as they were - in their positions by the grace of God. The focussed ascent of the visitor, who walks through a calculated light show, therefore corresponds to the historical "pomp solennel", the festive parade of the absolutists feudal lords. The "appareil magnifique" that belongs to this, the pageantry and ostentation, is answered to here by the reclaiming of pure, external pathos formula, the purity and clarity of the "stream of light".

Goulbier doesn’t, however, want an updated version of historical glorification, but rather, to present the experience of the illuminated lights in the ambience of the architecture. She is seeking to stage a dream world. This effect would have appeared to be even intensive in the (planned) "illumination using silky blue moonlight" of the large tower, which towers above the court like a lighthouse: an effect that this tower already had itself since its construction. The changing "light stations" decorated path of the visitors, from the low lying street up to the viewing terrace of the court platform, will ultimately be determined by the character of the light itself: It is the search and the longing for the open horizon, for illumination and freedom, the way from darkness into light that lies within every initiation that strives for redemption.