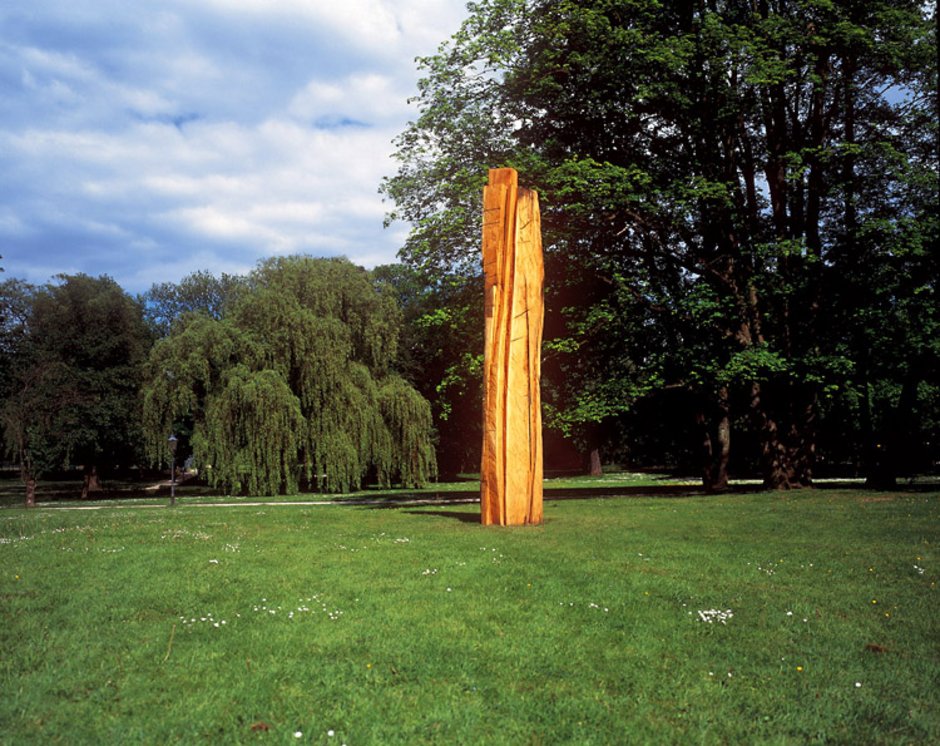 05/21/01
By now the sculpture is in Bad Homburg and will hopefully be attracting attention.

When I first saw it, the colossus was already dead. The oak was like a memorial to itself when I found it. The trunk was 6 m long and 1,5 m in diameter. The massive stump and roots suggested an awesome crown. Everything else had vanished, nice and clean, all evidence eliminated. Only two branches remained – they seemed like trees to me, that is how big they were. Lying there totally independently.

The two tree-branches accompanied me to Hasselbach. They were watching how I approached the 7 ton mass over the course of several weeks. You know the threat of empty paper, the first line after the first word that has been dismissed so many times.

From the outside, the trunk with its thick bark did not suggest any extraordinary periods of growth. But inside, judging from the unusually big and unusually uneven sapwood, I discovered a colorful past. After taking out the sapwood, its inner life became visible, a life that had been protected by the bark, together with the sapwood. The uncovering, peeling or even skinning is the first contact - it is done with the barking knife - a good metaphor for the process.

In Bad Homburg I studied the "home" of the oak, the extensive meadows, that spread under the trees, as if they wanted even more expanse, the spatial solitary trees, the lines of shrubs and bushes that negotiated over the height of the stranded giants. The direct neighbours played a special role, their height, their diameter, their crown and contours, their appearance and, more abstractly stated: their volumes and the voids between them, and how they comported amongst themselves.

In the maps of the gardens I am especially interested in contours that visualize the slope of the land. For: to make it vertical was a very spontaneous idea when I still did not know at all if I could not better compete with the assertions by creating a horizontal sculpture ...

Dedicating oneself to a sculptural project also means spelling out one’s mistakes, which are unavoidable, if a desire is supposed to take on a form. The agent of perpetual pros and cons, including and excluding, which sounds less hostile when it basically deals with the recognition of how one needs the other in order to approach one’s still unknown wanting-to-be. By the way, especially earlier on it was the English garden that had tried to integrate exotic, different cultures, into its landscapes with permeable, floating borders. With the replacement of the planned French gardens with their absolutist manners they sought to perform a change towards more democratic notions.

22/05/01
Two-dimensional paintings often create imaginary space, projecting their inner structure into the rooms of museums or closed rooms in general. Buildings, whether architectural or not, bear rooms inside that connect with the outside. We can name hills, valleys, meadows, fields, if that is what makes up the landscape, without getting ourselves involved with nature or different natures. Just the same as we didn’t before with beauty or with what beauty can be...

Looking for the dialogue with the Bad Homburg trunk of the Lenné-gardens’ original plants and their actual form, has brought up the thought, that I have strung more together, than perhaps should be followed by a logical continuum. But the act of writing itself keeps paths in tact that might have otherwise vanished. The trunk, taken out of its natural cycle, is a section like a time phase. It was handed over to a new life ...

I asked myself, how can you now appropriate a trunk, that from the beginning on, seemed too thick for its length to other proportions at all.

The idea of taking out a part and placing it back in an upright position, gave me the security to get closer to the tree and its distinctive sense of its own presence, that means, in having lead it away from its trunk growth that so characterized it, that it became more foreign to me. Sometimes an artwork is able to stand opposite you as something foreign and to ask itself, what happened?

The holes were easier to drill than I first thought. I see the pairs of holes and think about the many avenues and axes of view, which also opened the eyes of Sckell, Pückler or Lenné to everything pervasive, if something new is to emerge.

Excerpts from a letter to Gottlieb Leinz from Erwin Wortelkamp on the 21st and 22nd of May 2001.