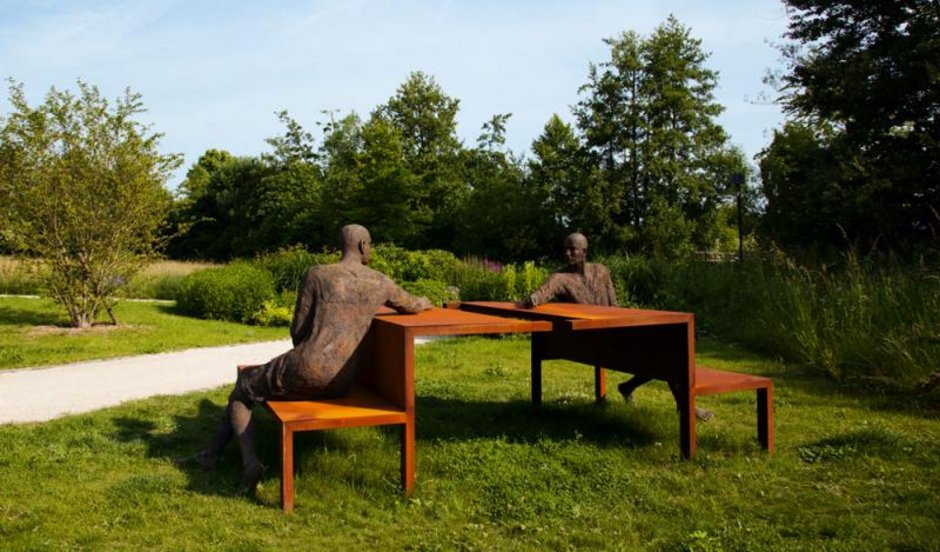 With her subtle figurative sculptures, Hanneke Beaumont’s work has attracted attention throughout Europe and in the United States. Her best-known work is probably the monumental sculpture “Stepping Forward”, installed in Brussels in front of the Council of the European Union building. From the beginning, Man lay at the centre of Beaumont’s artistic creation. Her mainly life-sized figures in terracotta, bronze or iron are supra-individual human forms, dressed in simple clothes as in a second skin. Neither their sex nor their age is discernible. Beaumont does not create portraits, she visualises through her sculpture the spiritual condition of Man. She focusses not on life’s triumphant moments, but rather on those fleeting moments betraying hesitation, irritation, disorientation or cautious new beginnings – even grief and melancholy – without ever overloading her figures with emotion.
Hanneke Beaumont’s composition of figures “Melancholia I” is on permanent display in the Bad Homburg “Skulpturenallee” between the railway station and the town hall. Now, in “Blickachsen 9”, the artist presents two works in the Niederhöchstadt Sculpture Park in Eschborn.
“Installation #56” shows two life-sized figures who are sitting facing away from each other on benches, and yet turned towards each other. Tentatively rather than deliberately reaching out, they each hold out an arm towards the other. Though their posture and this effortless gesture suggest a budding relationship, there is a yawning gap between them, making clear their particular isolation. The poetic tension between the two figures, the mix of familiarity and surprise in their facial expressions, of attraction and reserve in their gesture, express a feeling of longing, while opening at the same time a space for individual interpretation.
The second work on display in Eschborn is entitled “Melancholia II”. A single figure is sitting on a stepped iron structure, leaning towards an empty picture frame which is out of reach. As if the realisation of loss has made the figure drop its outstretched arm, the sunken posture and wistful expression convey a sense of resignation. The mirror immediately below him points to a search for self-knowledge, and as in “Melancholia I” the figure’s gaze is here directed at the past, the present, and the future.