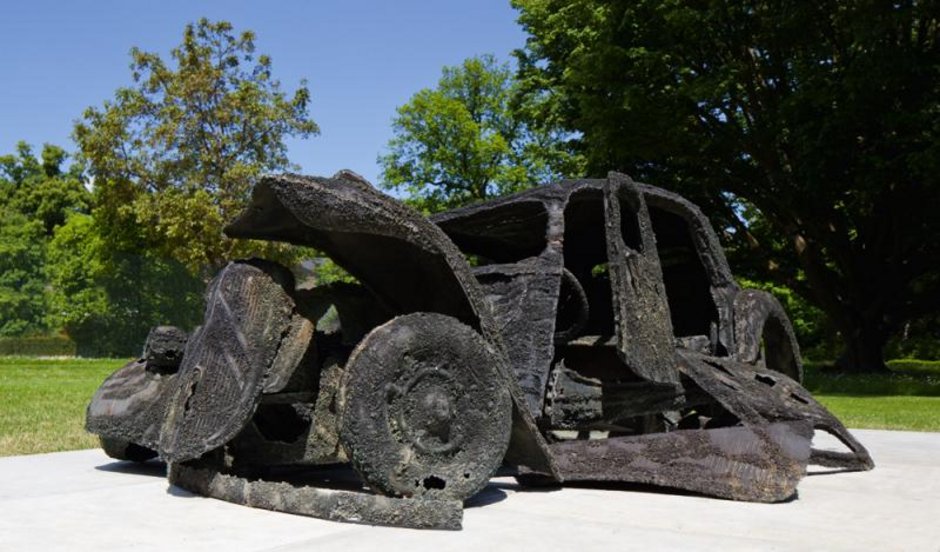 The French-American artist Arman (b. Armand Pierre Fernandez) is one of the leading exponents of Nouveau Réalisme. In the attempt to integrate everyday reality into art, Arman created works such as his celebrated “Accumulations”, in which he respectively amassed or rhythmically arranged countless identical everyday objects. His work “Traction avant, traction après” shows a broken-down old car, a ‘Traction Avant’ (‘Front-wheel drive’), as the first front-wheel drive Citroën models, built between 1934 and 1957, were called. The sculpture is part of the “Atlantis” series, a title which calls up the motif of the fabled lost island. For these works Arman cast a variety of everyday objects in bronze and encrusted them with a thick, opaque patina. In this the objects recall the archeological artefacts of a lost civilisation, long sunk under the sea. Yet the apparent signs of a long process of decay are no proof of age or historical authenticity: the clear modernity of the objects contradicts the projection into a mythical past. Rather, Arman characterises these works as “imaginary segments of the archeology of the future”.