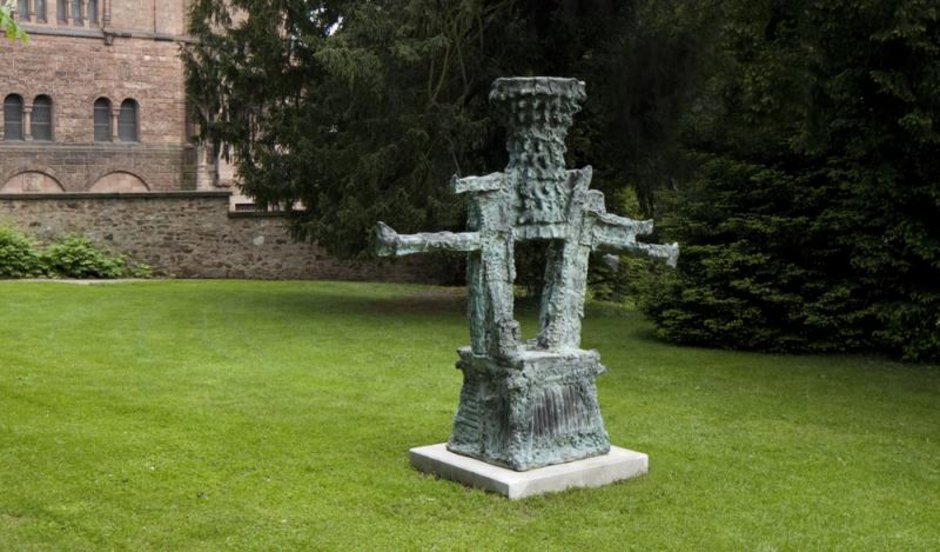 Jean-Paul Riopelle, one of the best-known Canadian artists, has also worked internationally,
and spent many years in France, during which time his work was displayed in major European
exhibitions. He achieved renown as the “wild Canadian” by virtue of his abstract paintings,
which were distinguished by a pastose application of paint and a highly expressive, gestic
brushstroke. His painterly and graphic work is diverse and ranges from oil painting to ink drawings,
collages and lithographs. Increasingly, since the 1960’s, Riopelle has also created sculptures in
bronze, dealing repeatedly with natural and animal forms, which can be interpreted as symbols
of the family or as tutelary spirits. In this he takes up the motif of the totem, which rests on the
notion of a being to which Man, through a primeval kinship, maintains a special relationship.
The term stems from the language spoken by the native inhabitants of what is today Québec,
the home of the artist. The bronze cast “La Tour” is characteristic of Riopelle’s sculpture, its
rough, uncompromising surface structure lending it a special vitality. The form of this work
arouses associations of a stylised human figure wearing a headdress of feathers.