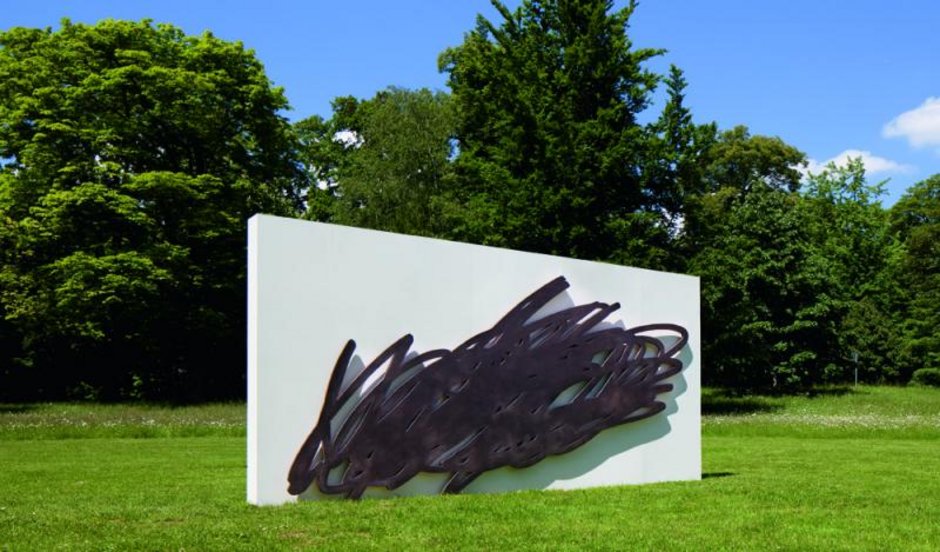 The creative process of the French artist Bernar Venet is closely bound up with a theoretical
preoccupation with art, and in particular with the thematic of the line. In addition to groups of
works exploring straight lines and strictly geometrical arcs, Venet’s unmistakable sculpture
also comprises irregular spiral forms and tangles of lines in square steel. In the early 1980’s he
also created these “Indeterminate Lines” as mural reliefs in wood. His more recent reliefs in the
“GRIB” series, whose title is derived from the French “gribouillage” (scribbles), are an extension
of this earlier work. In contrast to these, however, the newer works have no discernible beginning
or end point. The monumental reliefs have their origins in drawings haphazardly scribbled
by Venet on paper. This method of formal discovery on paper is mirrored by the cutting out of
these motifs from a three-and-a-half centimetre thick steel plate, which is done by hand, using
a blowtorch. Because of this, the exact shape of the reliefs cannot be precisely calculated even
as they are being created. The expressiveness and the dynamic of this creation of lines, and its
translation into a three-dimensional form, are the theme of the “GRIB” series.