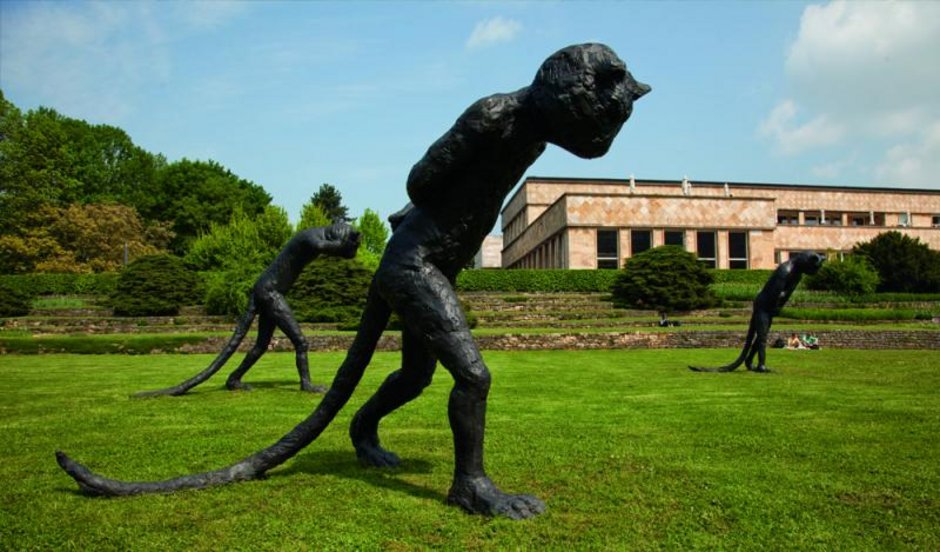 Laura Ford, who lives and works in London, is one of the most distinctive artists of her generation, and her works have been exhibited around the world. After taking part in the groundbreaking “British Art Show 5” in 2000, she went on to represent Great Britain at the Venice Biennale in 2005, and in 2011 her work was the subject of a major solo exhibition at the Frederik Meijer Gardens & Sculpture Park in the United States. Her sculptural works are to be seen in the public open spaces of numerous cities, and form part of the permanent collections of leading museums such as the Victoria & Albert Museum or the Tate Gallery in London. In Germany, Ford has become well-known through her participation in two previous “Blickachsen” exhibitions in Bad Homburg, and through numerous museum exhibitions.
Laura Ford makes use of the most varied of materials for her sculptural collages, creating alienated animal or child figures, hybrid creatures, which often seem like rag dolls – even when they are cast in bronze for display in the open air. These fanciful creatures seem at first playful and disarming, but at second glance turn out to be profoundly meaningful and questioning in their mischievous cryptic double-meanings and allusions to poverty and homelessness, hurt, violence or war. Proverbs, nursery rhymes and fairy-tales play a large part thematically in Ford’s works, but so do wider social and political issues or real events. Laura Ford herself describes her works as “a mix of humour, melancholy and darkness”. Without pathos, she develops a complex symbolic language, eliciting contrary sentiments in the observer, surprising, and for this very reason, moving him.
For “Blickachsen 9 RheinMain” Laura Ford has created an installation of six larger-than-life cat-creatures entitled “Emissary Cats”, which seem, with their bent posture and restless brooding, to be pacing back and forth on the Westend campus of the Goethe-Universität in Frankfurt. According to the artist, these cat-creatures were inspired by the giant tom, Behemoth, scoffing at the bitter seriousness of reality in Mikhail Bulgakov’s novel “The Master and Margarita”. She also cites Masaccio’s “Expulsion from the Garden of Eden” as an inspiration for some of the figures. In their various poses, the bronze figures with their slender human bodies, huge bowed cat-heads and long tails trailing on the ground, capture states of reflectiveness, of inner restlessness, despair and imprisonment. Situated in the grounds of the university, these ‘emissaries’, lost in thought, open up a further space for the play of meaning.