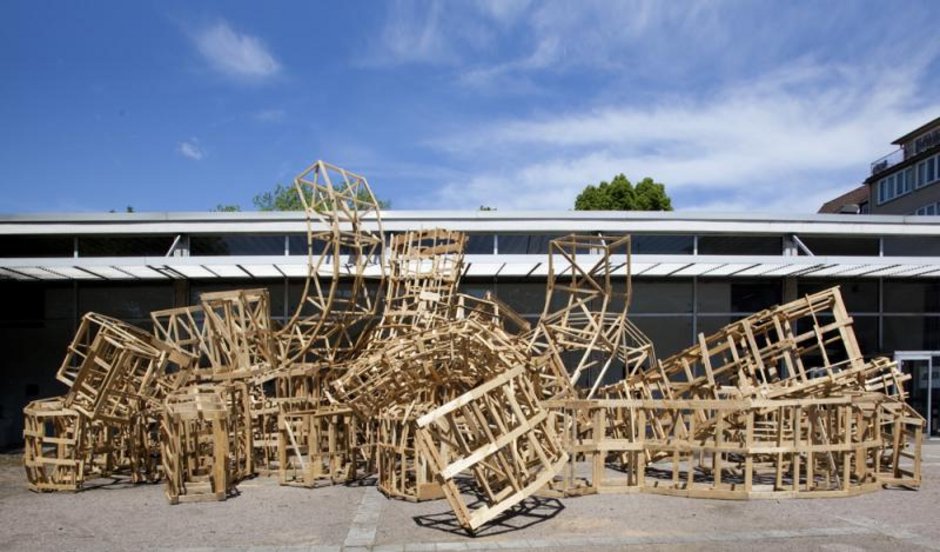 For the “Blickachsen 9” location in front of the Kunsthalle in Darmstadt, the Berlin artist Matthäus Thoma has designed one of his unmistakable expansive installations. Assembled on site by the artist, “Elvira”, a complex wood construction made of shovel-like curved segments of varying sizes and forms, seems to grow out of the Kunsthalle building, if not break out of it. “It is an interpretation of conceptually imagined sequences of movement,” explains Thoma, “the movements can be thought of as ocean waves, 15 metres wide and towering up to 5 metres high, crashing as breakers onto the forecourt of the Kunsthalle. What emerges from this, in the form of refractions, displacements and denticulation, is the subject of the sculptural work.” Despite the open, see-through structure of its components, carpentered from rough, untreated timber battens and boards, the effect is one of enormous energy – even of a destructive force – surging through the sculpture. At the same time, the simple formal language of the individual curved segments stands in a direct relationship to the geometric architectural clarity of the Kunsthalle, demanding both a dialogue and a confrontation with the building.
Thoma’s construction – and hence its title – was inspired by the striking façade relief on the Atelier Elvira building in Munich, which was erected in 1900 and demolished after the second world war. Surviving only in photographs, the stuccowork, entitled “The Smell of the Flaming Sea”, shows a giant stylised wave covering the entire front of the building.
Matthäus Thoma, who studied painting under Marwan at the Berlin University of the Arts and only then moved, via drawing, to sculpture, starts by designing his monumental wood installations – which seem to defy all rules of structural engineering – in the form of 1:10 scale architectural models. The results of this concentrated process of formal discovery provide a clearly thought through structure, but in their approximate scale serve only as an orientation for the concrete sculptural execution of the works. The basic form of the individual structural components, as well as the suggested course of movement in Thoma’s temporary “Elvira” installation in Darmstadt were also developed from a model and incorporated into the final design: the intricately interconnected structural components of this work seem to be crashing into each other, creating the overall impression of an eruptive movement originating in the Kunsthalle, and forcing itself outwards into the open air.