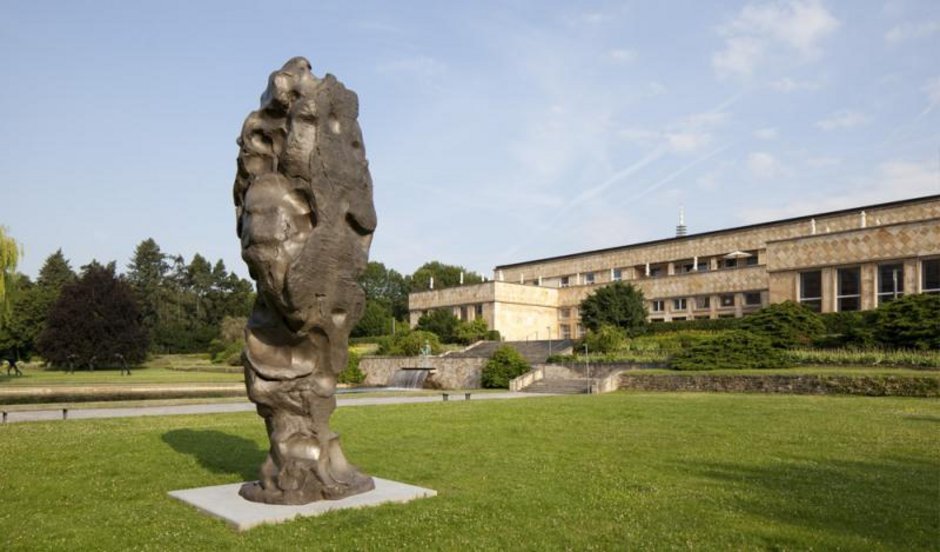 Sui Jianguo, professor of sculpture at the Beijing Central Academy of Fine Arts, is considered one of the most prominent and influential sculptors in China. His sculptural work spanning three decades reflects his continuous search for a personal artistic language that at the same time addresses contemporary questions of China’s transition from Cultural Revolution to industrial development. Sui Jianguo has gained international acclaim for his successive series of works ambivalently symbolising both China’s past and its present: his giant red dinosaurs with the inscription “Made in China”, his “Made in China” banners – or his hollow Mao jackets entitled “Legacy Mantle”, as seen in “Blickachsen 8” in Bad Homburg. This year, in “Blickachsen 9 RheinMain”, a number of very different works by Sui Jianguo, conveying the breadth of his artistic creation, are on display on the Westend campus of the Goethe University in Frankfurt.
Three monumental bronzes from his “Blind Portrait” series stand between the refectory and the IG-Farben building. These works are the result of an experimental search for the most highly authentic artistic expression possible. Blindfolded, Sui Jianguo first creates small-scale models of his “Blind Portraits” in clay, then casts them in a much larger size in bronze. ‘Blind’, and guided only by his sense of touch, he shapes his sculptures from a clay mass, unmediated by preconceived visual conceptions of form. From their rudimentary shape one can only surmise the bust of a head. “These sculptures cannot be described as abstract or as concrete,” says Sui Jianguo, “they are the carriers of traces of the sculptor’s body.” The immediacy of bodily expression is compared by Sui to that of a calligrapher whose brushstrokes express his own physical energy and personality.
By contrast, on the open space in front of the IG-Farben building, a work of Sui Jianguo’s entitled “Made in China” from 2011 can be seen. A standard 40-foot shipping container has the words “Made in China” cut out from it in giant letters. Sui here plays on notions of the mass production of goods in China and the role this has in world trade, as well as on the social impact of industrial development on the country itself. Furthermore the inscription can be read as a proof of origin – for the container (most of which are today produced in China), for the artwork created from it and, finally, for the artist himself – as a signature, and coming to terms with cultural identity.