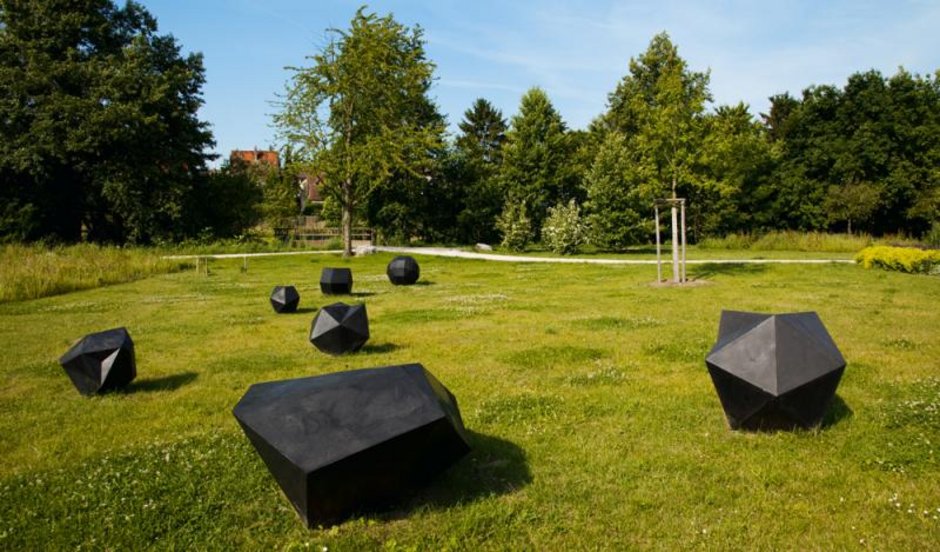 In his abstract sculptures and conceptual open-air installations, Michael Zwingmann favours an unusual material for sculpture, mastic asphalt. Zwingmann, who studied Art in Hanover from 1985-1993, during which time he also spent a year in India, has had his works exhibited in several European as well as Asian countries, and in 1998 was awarded the Arts Prize of the Darmstädter Sezession. His spacially extensive works “Invasion” (1999) and “Chamäleon” (2001), created for the second and third “Blickachsen” exhibitions, were on display in the Bad Homburg Kurpark.
In “Blickachsen 9 RheinMain” Zwingmann now presents a multi-part installation entitled “Annäherung an das Phänomen der Schwarzen Löcher”(Approach to the Phenomenon of Black Holes) in the Niederhöchstadt Sculpture Park in Eschborn. It consists of seven asphalt polyhedra of varying sizes and shapes, at first sight apparently randomly laid out on the sculpture park meadow in a simulation of the Big Dipper star constellation. The artist himself terms these objects, with their surfaces of squares and equilateral triangles, as playful derivatives of ideal geometric forms, as described by Plato in his remarks on the creation of the universe in the “Timaeus” dialogue. At the same time, the strict geometry of the exhibited asphalt bodies is at one point broken open, revealing the traces of their production process: Zwingmann poured the grainy and when heated, viscous, asphalt into casting moulds of steel, giving the finished bodies a relatively homogeneous, smooth surface quality. This smoothness contrasts with the structure of the granular asphalt mass at the mould’s opening, which protudes or subsides depending on the amount poured in. Here, process and dynamic seem to find their expression. After the material had cooled and the moulds were taken off, Zwingmann treated the hardened objects of his installation with black pigmented wax. The colouration plays a decisive role in his artistic approach to one of the most mysterious phenomena in space – for black holes are objects of such high density that not even light can escape their gravitational pull; they are the blackest bodies known to us.
Yet his arrangement makes no claim to representing the unrepresentable: the form and configuration of his constructs are inspired by other contexts, and the deep black, gleaming ‘celestial bodies’, almost glistening in the sunlight, make available to our senses that which eludes our power of imagination.