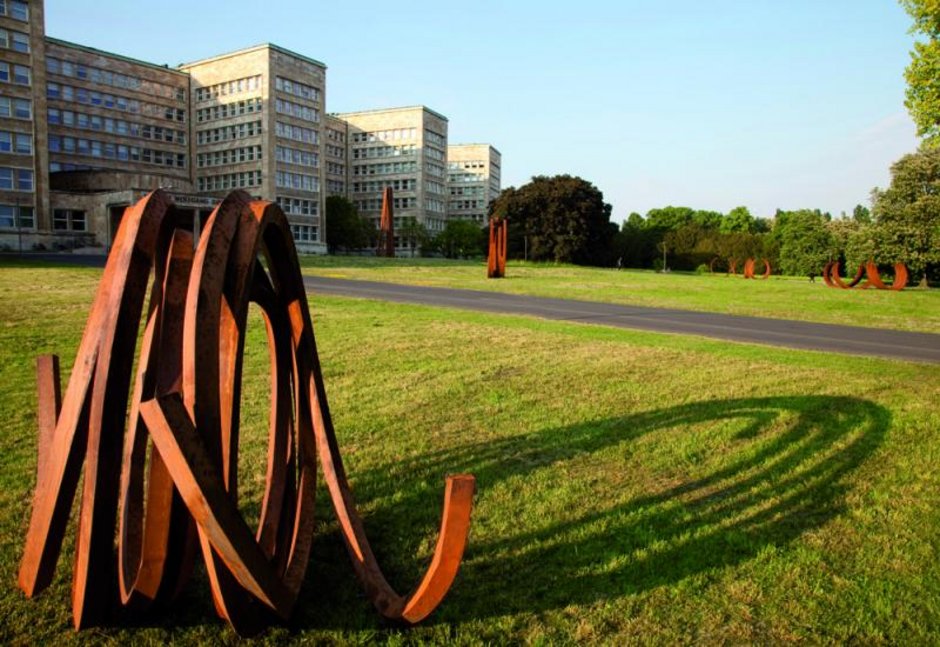 Bernar Venet is world famous for his unmistakable steel sculptures in the public open space. His best-known work in Germany is probably his “Arc de 124,5º”, permanently installed in Berlin. Venet’s pre-eminent status in the world of contemporary art is based on the multifacetted nature of his work, which from early on in his career he has consistently developed. This includes drawings, panel paintings and sculptures, as well as performance art, sound recordings and film, in addition to his art-theoretical writing. From the beginning, theoretical deliberations determined Venet’s artistic output. As early as 1964 – at the age of 23 – he was able to exhibit in the Salon “Comparaisons” in the Museum of Modern Art in Paris. Subsequently he concerned himself with the objective character and intrinsic meaning of technical drawings and diagrams, and in 1966 he presented a blueprint for a tube, in which he postulated an equivalence between information about an object and the object itself. With these early, conceptual works Venet, who by now was living in New York, took part in the legendary avant-garde exhibition “Prospect 68” in Düsseldorf, in 1968. In the same year the Museum of Modern Art in New York acquired one of his works, and shortly after, his first individual exhibition was held. As a logical consequence of his radical conceptual position, Venet abandoned artistic work in 1969. Until 1975 he devoted himself to writing and giving lectures on art theory. Subsequently however, while preparing a retrospective of his work, he resumed his artistic production. He started, in his pictures, to concern himself with the elementary geometric figures “Angles” and “Arcs”, in order, finally, to confer a three-dimensional form to his ideas, and develop his first steel sculptures. In 1974 In the 1970's Venet took part in the São Paolo Biennale, in documenta 6 in Kassel, and in the Venice Biennale. Since then, his works have continued to be shown world-wide in major exhibitions, and his open-space sculptures are to be seen in prominent positions in many cities – for example, currently in the gardens of the Palace of Versailles. In “Blickachsen” in Bad Homburg, Venet was represented in three exhibitions. His sculpture “Indeterminate Line” is on permanent display in the Bad Homburg Kurpark. This year, in “Blickachsen 8 RheinMain”, nine large-scale sculptures by Venet are on show in the Westend campus of the Goethe- Universität in Frankfurt. On a large meadow in front of the listed main buildings of the university quarter, they are visible from afar, and complement the ensemble through their dynamic presence, their clearly articulated forms, and their glowing rust-red colour. A further work by Venet can be seen on the Riedberg campus. The sculptures on display are more recent works continuing Venet’s preoccupation with the thematic of the line, which has been central to his work since the “Angles” and “Arcs” of the 1980’s. Starting from the line as the graphical rendition of mathematical equations, or as the representation of simple mathematical information describing angles, curves or diagonals, Venet moved on in his pictures and drawings to a consideration of unpredictable lines. In his plastic works Venet employs square steel bars to represent the line, forming either rigorously straight geometrical lines – as in the soaring “9 Straight Lines” of 2008 which, from the campus, creates a powerful optical connection to the Frankfurt skyline – or simple arcs up to 20 metres high. In other works Venet arranges several identical arcs parallel to each other, yet staggered – or combines them in several ‘bundles’. As in the six examples exhibited, the titles identify the precise angle of the circle segment which the identical arcs describe, together with their number. Only on a second glance does it become clear to the observer that the arcs are equal both in form and in the size of their segments – when he discovers the engraved degree value. In these works Venet combines a strict geometry with a free artistic composition of balance and proportion which cannot be defined in a formula. Despite the reduced pictorial language, these spatially extensive bundles of arcs convey an impression of dynamic power and movement. ‘Indeterminate lines’, on the other hand, are rendered by Venet in the form of irregular spirals and tangles of steel. Three works from the “Indeterminate Lines” series – embodying, for Venet, the “energy of atomic masses” – are to be seen in the current exhibition. They radiate their absolute formal incalculability, their material seems to be held in a tension, and they come alive through the distinctive play of light and shade on the rolled square steel.