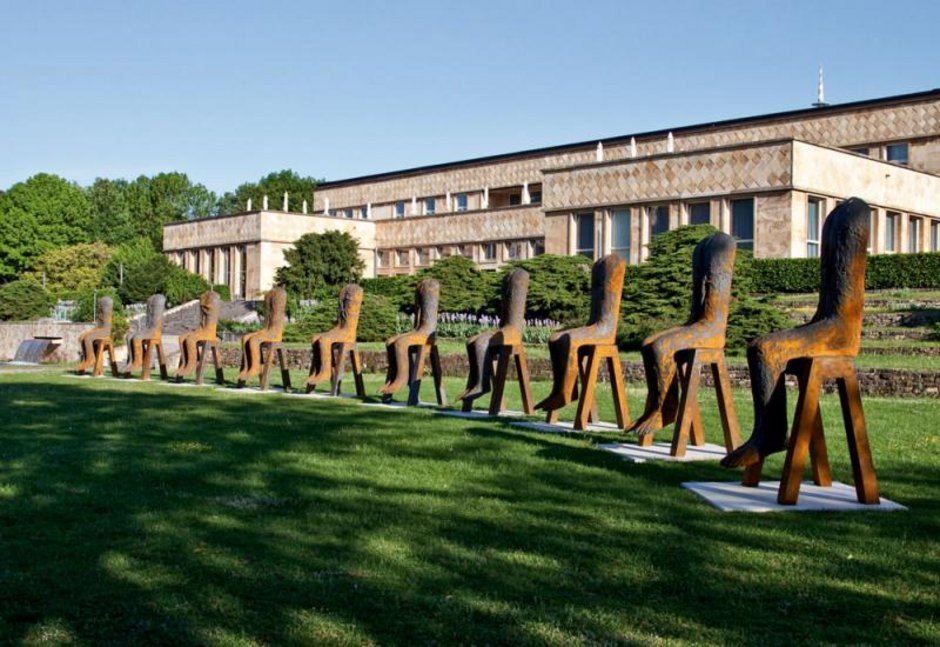 The unmistakable work of the Polish sculptress Magdalena Abakanowicz has contributed significantly to the re-evaluation of the figurative tradition in contemporary sculpture. Abakanowicz’s works are reflections on the horrors of the war years she experienced as a child in Warsaw: they give a form to the unspeakable. They offer the observer a figure as a catalyst – recognizable or divineable, incomplete or fragmented, isolated or grouped together. Animal-like creatures, hybrids between man and beast, or headless striding, standing or sitting human figures are arranged in small up to very large groups. These sculptures, oscillating between fragility and weight, vulnerability and assertiveness, hold the observer in a fascination it is almost impossible to escape from. The winner of numerous awards since 1965, Magdalena Abakanowicz has been presenting her work internationally and is now on display in the world’s major collections and museums. Several of her expressive and constantly challenging works have been on display in previous “Blickachsen” exhibitions in Bad Homburg. This year, the monumental sculpture “Head”, and three strange bird-like creatures, flying as if in a small swarm, are to be seen. As part of “Blickachsen 8 RheinMain”, Abakanowicz presents an installation of ten larger-than-life sitting figures in the Westend campus of the Goethe-Universität in Frankfurt. Though the details of their surfaces are individually worked, together the same-shaped human bodies form a seemingly supra-individual grouping. The missing heads and arms makes them seem anonymous and passive, lending them a sinister, ghost-like quality. Furthermore their physicality is negated by the absence, in the design, of their backs: they are hollow, with no core and no back, looking like empty shells. Yet, sitting dignified and upright, apparently frozen in their uniform posture, they strike the observer with their enormous presence. The installation of the sitting torsos forms an arch, reflecting the architecture of the campus. This formal correspondence opens additional layers of meaning, related to both the ensemble of the IG-Farben buildings, with their chequered history, as well as to the university location and the concept of a ‘community of teachers and scholars’.