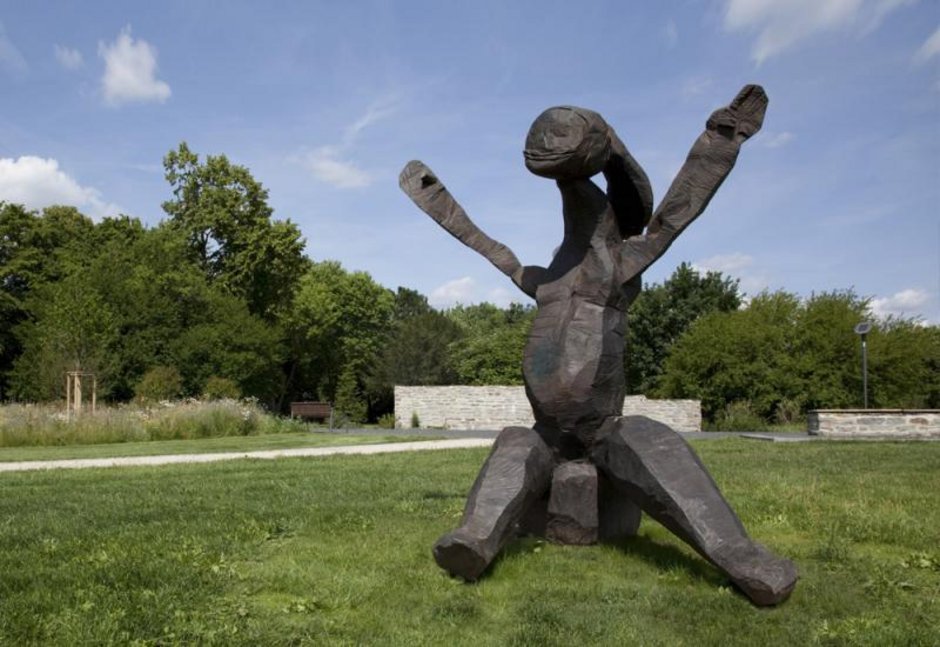 The sculptor and graphic artist Dietrich Klinge focusses, in his sculptural work, on the human figure. With his abstract-figurative forms he creates an expressive, seemingly archaic figurative world out of strangely gesturing whole figures in the most varied of postures, as well as busts, heads, and also reliefs. All his works seem as if they were roughly hewn out of wood, though in fact they are all bronze casts in which the surface structure of the wood mould has been preserved. Klinge starts his working process only after a period of detailed thought and advanced planning. Smaller figures are created from a single block of wood; larger, monumental forms and more complex compositions emerge from a combination of several worked blocks. The bronzes cast out of the resulting wood moulds are finally given a carefully applied patina, which re-inforces the impression that they are made of wood. Klinge's open-air sculptures are installed in public open spaces in many German cities and, increasingly, in the USA. In the last “Blickachsen” exhibition in Bad Homburg, three powerful monumental sculptures by Klinge, installed on the Kurpark meadow below the Schmuckplatz, could be seen from far away. This year, as part of “Blickachsen 8 RheinMain”, three further bold works by Klinge can be seen in the Niederhöchstadt sculpture park. The two works entitled “Entwurf für eine große Figur” (Design for a Large Figure) and the equally larger-than-life, sitting “Polyanthe” develop a dynamic all of their own from the tension between their massive physical presence and their spatial movement. They seem clumsy and yet at the same time as if dancing, taking their elemental force from the ground on which they stand, and from their immediate surroundings. Each of these figures emanates a physical and psychic energy – one which any passer-by cannot fail to experience. But despite the boldness of forms and gestures, Klinge’s sculpture is concerned essentially with contemplation and inner peace, or also with an inner struggle between active and passive states of being. It is from the balance between their forceful, emphatic presence and their contemplative, often spiritual, bearing that these sculptures attain their incomparable power.