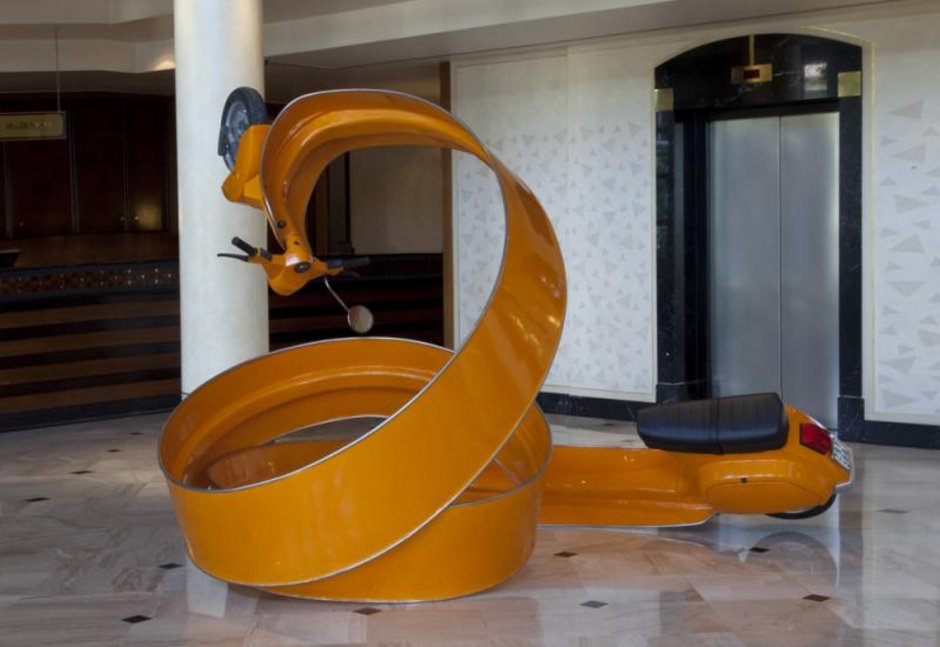 Stefan Rohrer’s sculptures and drawings are shaped by his personal passion for cars. He breaks open the bodywork of cars, motorcycles and scooters, stretches and expands them by inserting steel plates, and transforms them into elegantly curved or serpentine, arabesque objects. In them, the process of their movement itself seems to become materialized, as if captured in a time-lapse telling its story. Rohrer himself says that he is visualizing the thrill of speed – catastrophes included. Thus in his work “Arancio”, made from a Vespa, the front wheel of the scooter flies through the air, while the rear wheel seems to the observer to be set back in time, to the moment it was still firmly on solid ground. On the other hand “Yellow Arrow”, made specially for “Blickachsen 8”, is coiled around a tree standing not far from the road through the Kurpark, its elongated tail marking its tremendous speed as well as its direction of travel. The title of this garishly-coloured “Yellow Arrow” recalls the myth of the “Silver Arrow” in German racing history. Filled with tension, Stefan Rohrer’s optically seductive works unite desire and danger, a feeling of being carefree with that of being serious.