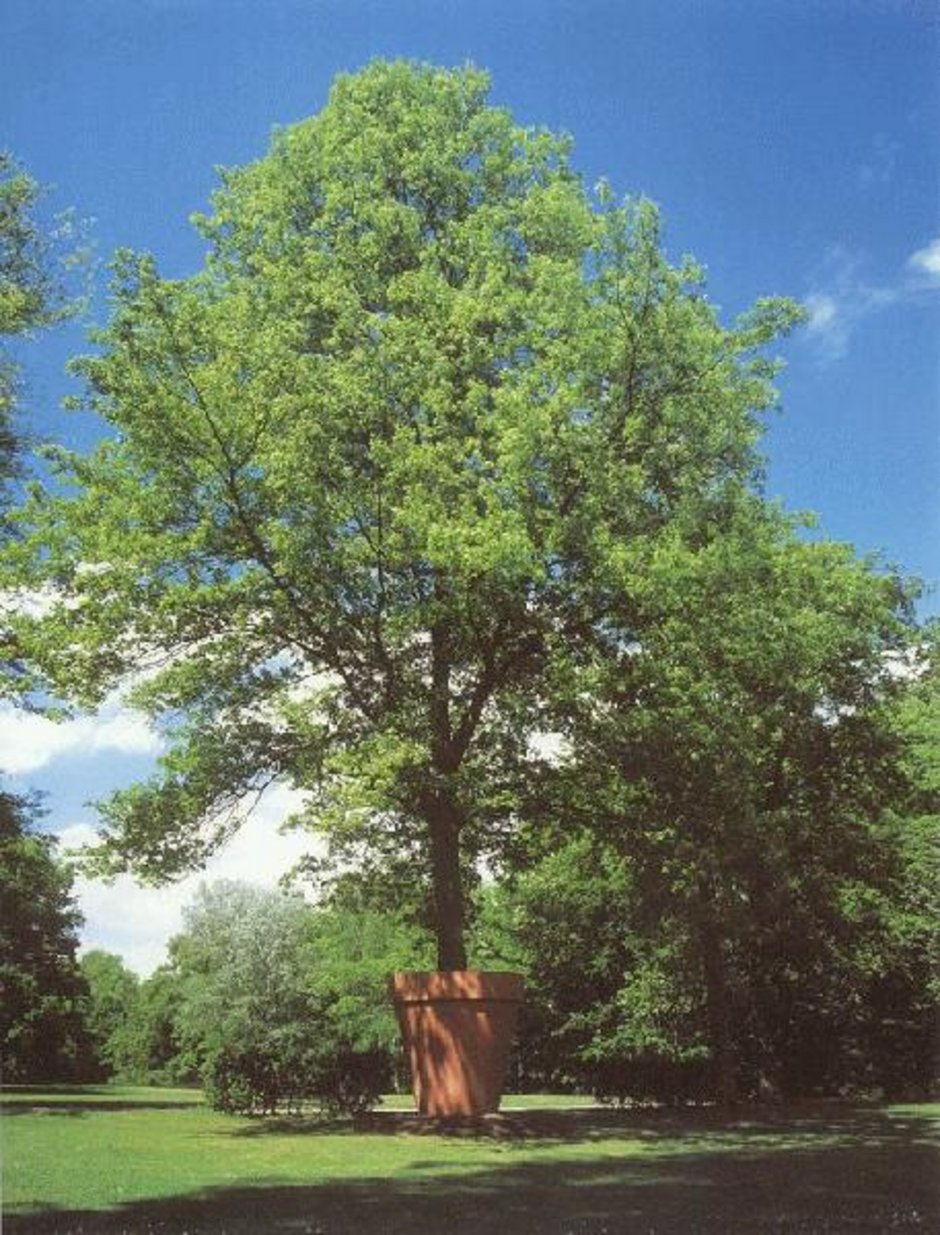 Art is never complete, especially if, like in the works of Timm Ulrich for the past thirty years, it is staged as conceptual "Totalkunst" ("Total Art"). At the same time Ulrichs pursues his art in reverence to its connection with natural phenomena as a picture puzzle and change of view. There is "the method of literal perception, there are the panels and textures born by the spirit of tautology, the mystery of identity, the localizations and patterns of adaption forced onto by geography, biology and artificial deception" (Ulrichs 1985).

Far from getting lost in neo-dadaistic tricks Ulrichs is concerned with the playful juggling of intentions, patterns of behaviour and images. Just like language being based on agreements every object can be transformed into its opposite by change of conditions. "Das Buch der Natur" ("The Book of Nature", title of an outdoor work from 1972) consisting of two perforated limestones with five living olive trees growing through its holes has to be read each time anew, if one is willing to understand and exhibit nature that is constantly changing.

Ulrichs expressed his idea of the "Versatzstück" ("Set Piece") already in 1969: "I exhibited mobile trees (on wheels): illusory set pieces, dummies with wheels and shafts, seemingly movable trees to which we adjusted giant flower pots and buckets and (Christmas tree) stands around their firmly rooted trees (so that in the end they were for their human features spared of being felled)."

The actual garden sculpture "Baum im Topf" ("Tree in Pot") was realized in detailed sketches by Ulrichs for the first time for the French Gardens in Celle in 1994, designed as an unmovable outdoor sculpture. For the Kurpark in Bad Homburg he therefore created a new but nearly identical version. In his application for the competition of the landscape patio of the Bundessortenamt (federal bureau of botanical varieties) in Hanover where he proposed the concept of his outdoor sculpture he gives a detailed explanation: "My project of tree as potted plant requires a tree to be planted (in this case a linden tree for its shallow roots) and provide it with a large, 250 cm high flower pot (without soil) so that for the dummy the tree will not seem rooted at all, but movable, like a set piece, a mobile piece of furniture. One may say that the tree, similarly centralized like a village's linden tree in former times, represents nature, meanwhile the pot stands for culture. The same type of haunting domestication forms part of the work of the Bundessortenamt: testing and cultivating plants in respect to their usability for man, growing and bringing up varieties and nursing the trees. Therefore the tree stands for the tense relationship between nature and culture without crudely pointing it out. The effect is rather playful, a transplantation from Gulliver’s world (or Claes Oldenburg's) into ours. The tree whose growth will not be disturbed by the pot is naturally easy to care for and weatherproof. The concrete pot ... will once in a while need a new painting with brick-red emulsion paint that I will provide. Upside (not to be seen) the pot is protected against falling leaves by a metal grid."