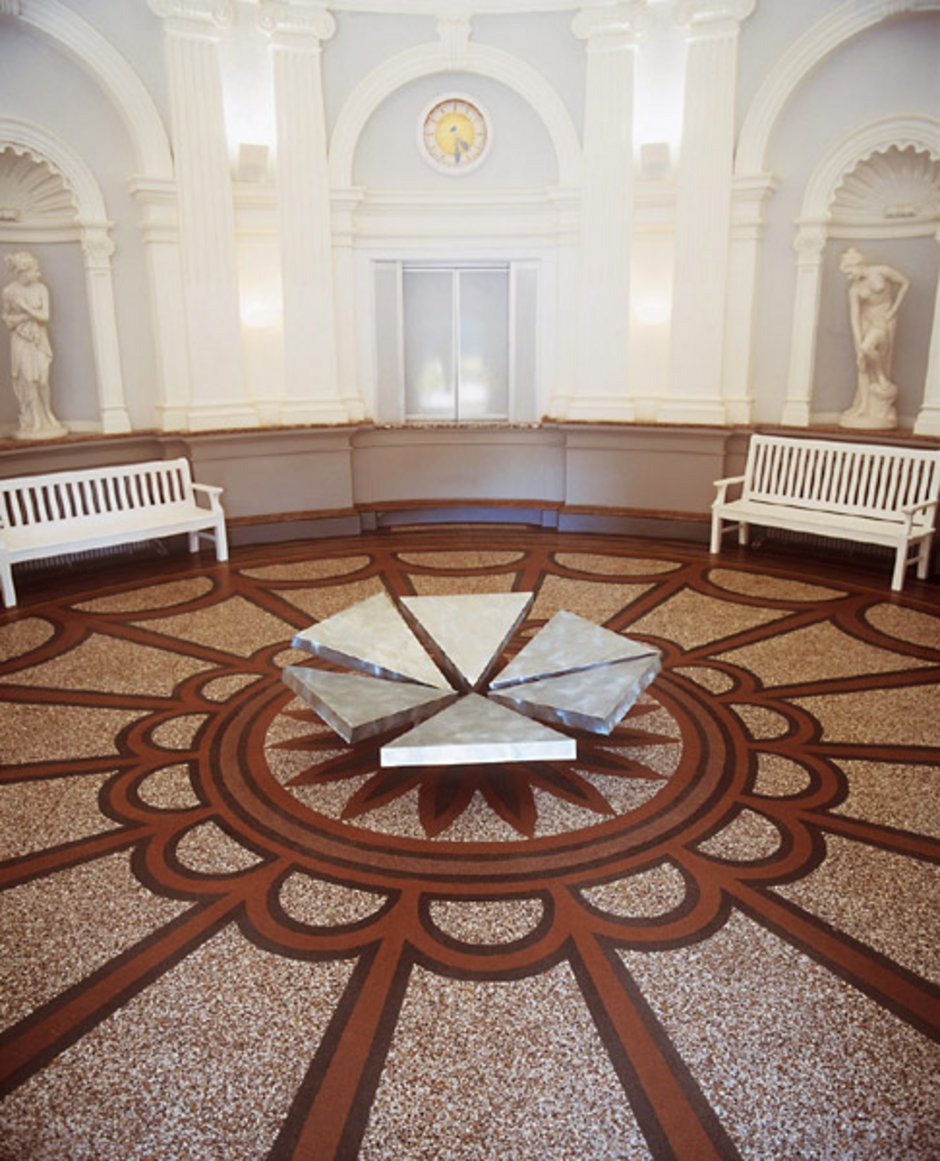 "Six Triangles, Hexagon V" (1979) is one of George Rickey’s few sculptures at ground level. The kinetic scientist Rickey, who lets motion take its course, freely defines this unusual solution as "maybe capricious variation with a simple basic shape, similar to four- and five-leaf flowers that obey their intrinsic geometrical rules. The wind will move their petals but will not change them except for turning them into the medium of a poetic message" – the high-grade steel sculpture moved by the wind as expression of an artistic, poetical abstraction. The proximity to nature inspired the multiple artwork "Twenty nine squares" of 1986 is obvious: twenty nine metal chips equal the leaves of a tree or shrub.

"Six Triangles, Hexagon V" that has a kind of precursor in the series around the "nimble squares" of 1969, is based on a rhythmically staggering pattern of triangular surfaces each of which is inclined toward the middle, their short poles being attached to their undersurface and welded to a hexagonal frame. The triangles are arranged in a radial pattern not touching their respective neighbour. In the (hexagonal) inner or outer outline of their semicircular diameter they do not fuse into a ring either or even reach the same height. This way, the free standing of each basic shape and the weight of each triangle remain visible. At the same time, the symmetry of three triangles on each side facing each other in complete balance gives an impression of tranquility, corresponding to the inhaling and exhaling of an organic body. Even when stationary, the triangles' funnel-like inclination towards the middle hints at a soft rhythm of movement, as if they would open and close in harmony like the petals of a flower. Besides the association "flower", the work may also be seen as kind of a bowl or vessel. Here an ever vanishing content has to be refilled again and again with scooping gestures. The principle of life is congruent with the desire for fertility.

These characteristics representing "living water" are emphasized by its actual location within the entrance hall of the Kaiser-Wilhelms-Bad: The protective shell of the neo-classical architecture grants the healing and inner fulfillment supported by the house gods Hygieia and Asklepios.