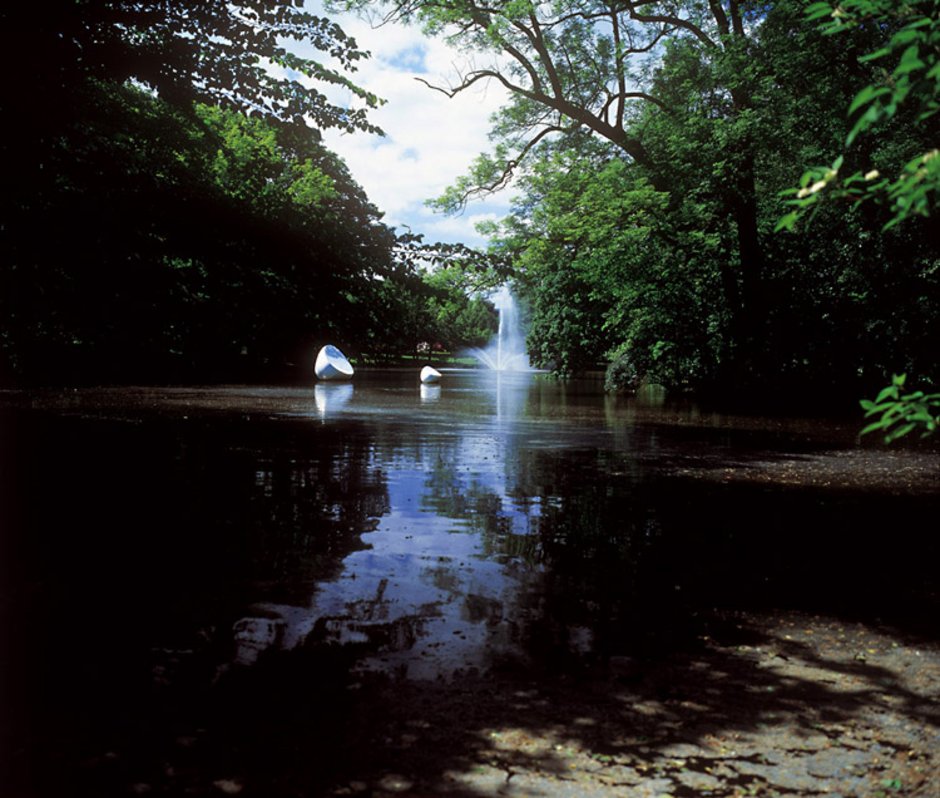 Normally the two elements of the "Sculpture flottante" how Marta Pan calls her water works are floating on the Berta Pond in Duisburg where they form part of a harmonious ensemble with other outdoor sculptures in a leisure landscape similar to Bad Homburg. Hence her artistic confession will prove true for this temporary location too: "From the encounter of water, wind, sun and sculpture a new unity arises. It collects the energy of nature and man within in one and the same nimble shape. The sculpture and the movement it shares with water and wind becomes the link between an inanimate world and the world of life. They are the place where nature, city and people meet, connection and transition, experience and sign" (Marta Pan, 1979).

Her encounter with the round archaic shapes of Constantin Brancusi and the admiration of Maurice Béjart's Ballet were first crucial experiences for the Hungarian sculptress when she moved to Paris in 1947. Both Brancusi's elementary perception of form and Béjart’s precise choreography of animate bodies were notions that she tried to realize in her own work. Her work was mainly to be represented in public space. Especially her "Imaginary Landscapes" provided the interchange of those sculptural forces, that were to come to artistic perfection in the balance of object, measure and composition. "By means of forms that are balanced and mobile at the same time, I believe to approach the realm of the living."

A part of her most important works are the numerous "Floating Sculptures", the synthesis of the element water and the shell-like shapes constituting a leitmotif of the artist. Marta Pan created the first "Sculpture flottante" in 1961 for the gardens of the Kröller-Müller-Museum in Otterlo. Today, similar works are exhibited in Lausanne (no. 2, 1966), in the Open-Air Museum of Okone, Japan (no. 3, 1969), in Montreal (no. 4, 1970), in Bobigny/St. Denis (no. 5, 1971), in front of the city hall of Dallas, USA (no. 6, 1977) and version no. 7 that is here to be seen (1979/80). The prism-like pair made from polyester and tinted bright white are connected by a chain and a pole under water. Like "mother and child" the two are floating on the surface of the lake with asymmetrical proportions and concave backs. The underwater pole provides a static distance so that the volumes will not touch each other even with stronger winds, but revolve around each other like satellites. The floating, brilliantly polished texture of the bodies is enhanced by their reflection on the surface of the water that doubles their shape and replenishes the bright white with the shining green and blue of nature.