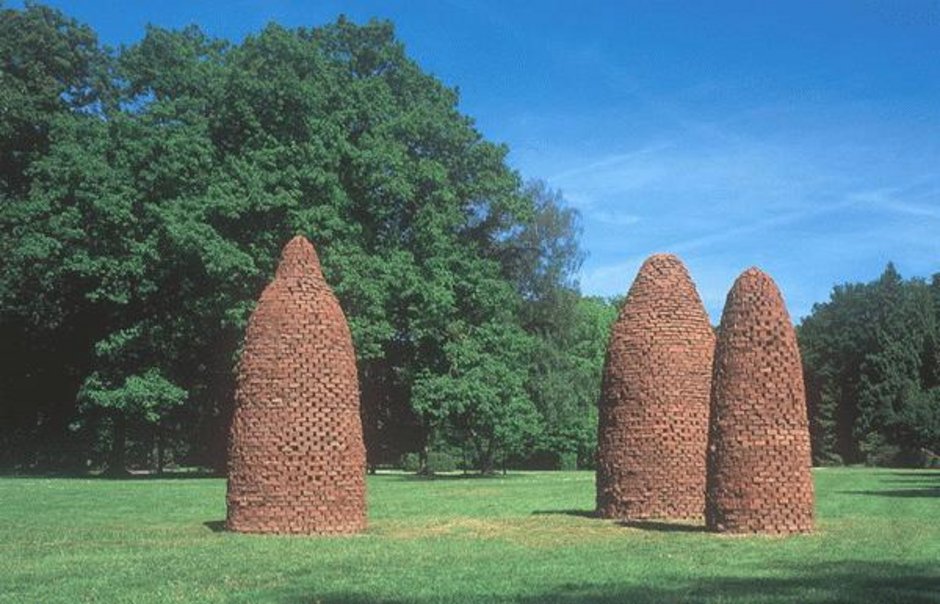 Brick and tiles belong to the oldest building materials that were used by man. They go back to the high cultures of Mesopotamia and Egypt (ziggurat and pyramid). The simple natural building blocks can be joined together into limitless shapes and constructions. For their historical and technical proximity to the emergence of architecture they are representative of the notion of building itself. Due to this, material edifices grow along vertical and horizontal axes. Edges, corners and round curves create spaces. In accordance with this, gravitation rooms close up towards the outside of the building and create space inwardly. In the same way, Seliger’s brick-sculpture is reclaiming its shape in space and location. Even though it is entirely handmade the sculpture therefore remains a work of architecture. In taking after the traditional monolith it is perfectly suited for the freestanding sculpture.

Reiner Seliger developed a language from the treatment of brick, which he presents for example in his brickwork "Sesto" (1998 for the Architekturgalerie München) introducing the technique of the "false vault". By perfect linking and stacking of red brick without mortar he creates a statically stable order. From a small foot, the swelling layers form a smooth, regular curve and merge joint by joint into a vault. The organic, swelling and fading basic structures are characteristic of all of Seliger's constructions and sculptures, most of which are realized in sensually red baked tiles. The forms merge into geometrical shapes (globe, oval, cone), avoiding the right angle by any means, as opposed to Heerich and Kirkeby.

Seliger's constructions lack doors and windows, they remain pure, nonsensical shells without pedestals, seemingly grown out of the ground like prototypical matter, archetypical prehistoric monuments, mysterious chambers of roaming nomads. Images of the stone Nuraghe of Sardinia come to mind. The formation of several elements to a Trias like the one in Bad Homburg enhances the impression of a deserted settlement. The notion of archaic immutability corresponds with the impossibility to decide if these shells represent a necropolis or shells of buildings, death or life. At any rate, the ordinary is just as alien to these enigmatic formations as to the image of sublime towers of light.