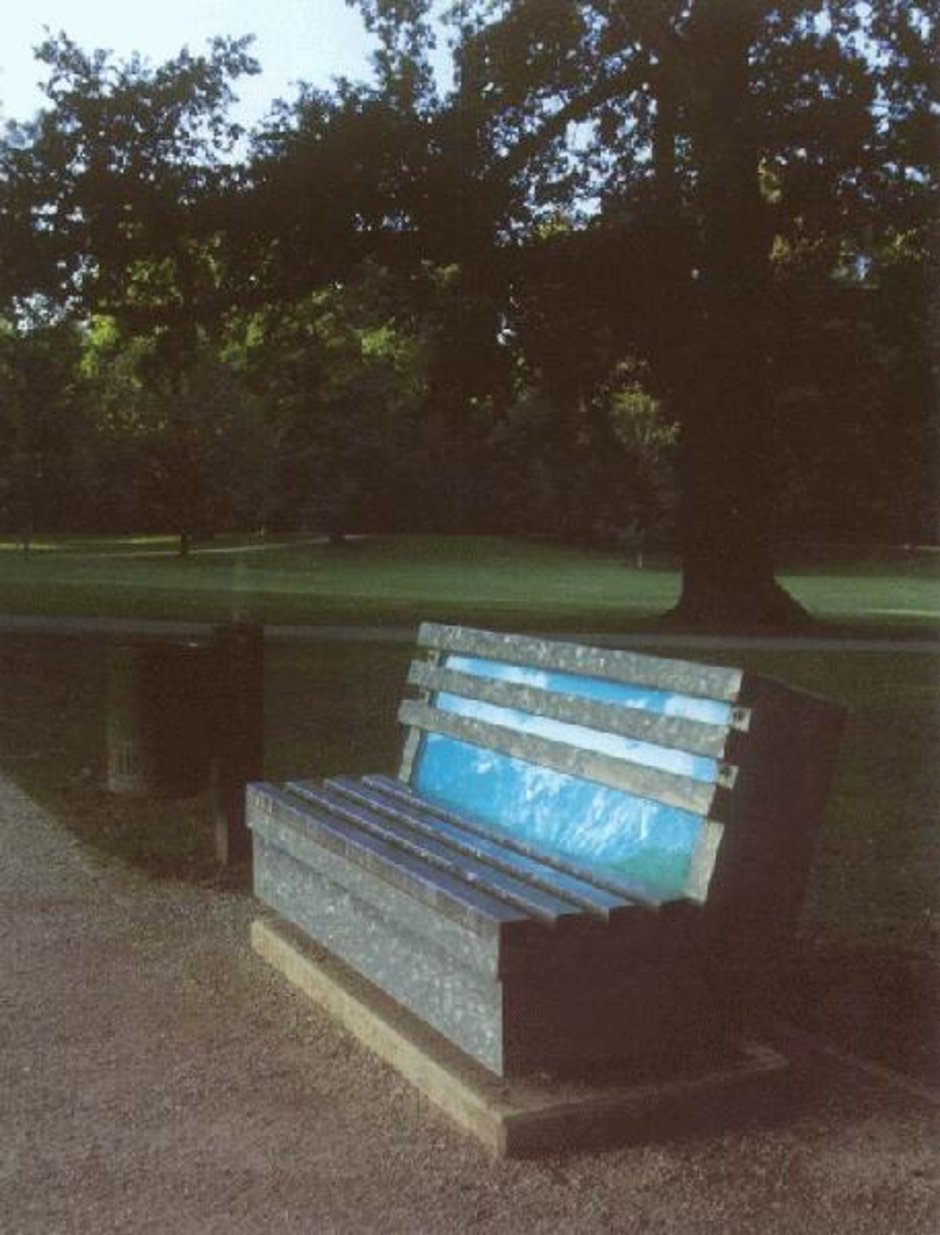 Originally Gerhards set up his bench of galvanized steel in front of the Heimathaus (museum of local history, that at the same time serves as registry office) in Everswinkel close to Münster. The culture club of the rural community asked the sculptor in 1998 to create a sculpture for the town's highly developed center under the motto "Der stille Winkel" ("The Quiet Corner"). Gerhards positioned the bench that he designed next to the entrance gate of the Heimathaus where there had traditionally always been benches facing the center of the square. The construction, with its comfortably shaped backrest, consists of four square tubes for the seat and three square tubes for the back. The surfaces of the seat and back show a picture of a bright mountain range that is embedded between two acrylic glass panels underneath the square tubes. The picture is illuminated by seven fluorescent tubes. The sitting bench is thus transformed into a light bench that unfolds its magic fully in the dark, when the picture is lit up from inside. Gerhard has now moved a light bench to the bank of the pond in the Kurpark in Bad Homburg, where at dusk it is doubled by the reflection in the nearby water surface. A second bench that was especially designed for Bad Homburg was placed under the trees right by the Siamese Temple. Here it invites the visitor to enjoy the charming chimes in the temple's gable and the enchanting effect of the exotic architecture also during the daytime.

At the lake, as well as by the staffage architecture of the Siamese Temple, the bench may serve as common requisite of the landscape garden inviting the visitor to the meditation of the sublime. The motif of the shining mountain range, where the visitor has literally taken seat, represents this dialogue with nature, light and the sublime like René Magritte's seemingly romantic paintings. Without trying to reproduce a veritable mountain range Gerhards chose his panoramic views so that the seated person will "carry" the massive mountains on his back while he "sits" in the valley. He seems to be floating on a raised hide and – as is characteristic of the pensive human – indulged into the mystery of religious feelings or philosophical thoughts. "Memory" is the cryptic title of the bench, the memory of the meaning of life and of the utopia of faraway hopes for redemption and light, barred by square tube gratings.