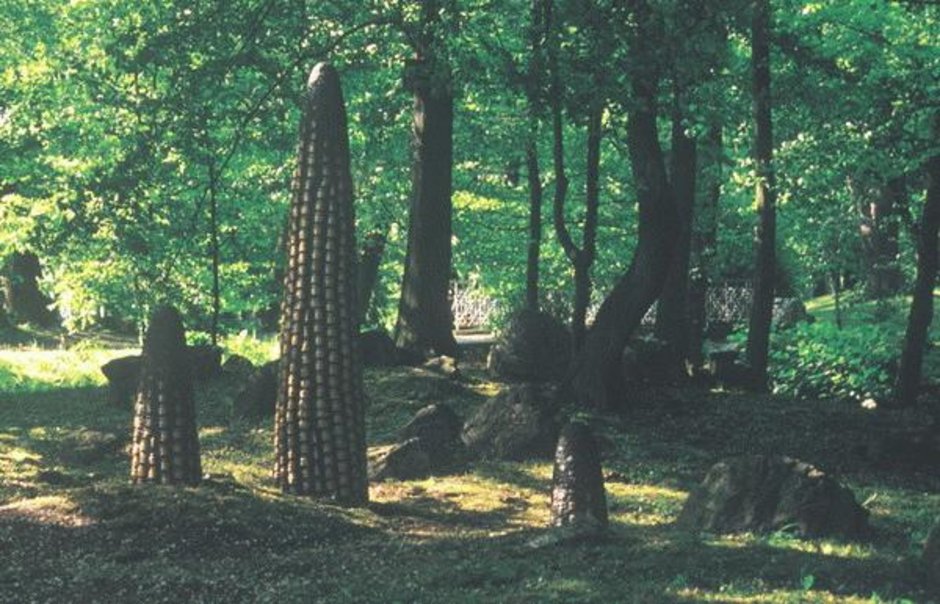 What a sculptor has cut out of a stone cannot be undone. The material is too dominant to allow any spontaneous perceptions, improvisations or corrections. Thus the expression of transience, of the ephemeral, that would require a flexible and supple processing is to a large degree dominated by the compact construction. Who, like Krüll, nevertheless intends to break up the block into formless matter in order to lend greater stimulus and dynamics to the imagination of the observer and to the metamorphosis of things, has to identify a minimized basic shape that he will then multiply and add into larger, even oversized formats.

This working method is illustrated by the bronze cast "Corncob" and its two smaller satellites. The definitive bronze casts were made using a polyester model (cast in silicon molds from an original plaster version) of the artistically piled up basic shapes that were based on customary glass containers. Only the polished bronze acquires the elasticity, brilliance and roundness that are associated with corncobs according to the metamorphosis of things. Planted firmly into the soil, the objects can be identified with the botanical specimen, growing in neat ribs and rows, layer by layer into the air, parallel to nature. The swelling shaft thickens into a tree-like trunk towards the middle and narrows towards the top in decreasing phases of growth, a hypertrophied exaggeration of "real" corncobs. The top itself is rounded off and seems to be covered with soil.

The oversized bronze-"mother", which seems to be ready for harvest, is accompanied by two smaller seedlings; two children. They are not fully grown yet, even if they already show the characteristic roundness. In front of the greening foliage of the Kurpark they seem like exotic strangers from a distant tropical zone where the fruit cobs swell until bursting under the constant sun. Before Krüll carried out still lives of neatly rounded oversized egg-shapes in plaster and polyester (1991 and 1999) that were carefully placed in protecting containers as if for commercial display. Just as the "Corn Cobs" their sterile artificiality and unsavouriness plays a provocative game with the frustrating effect that presents itself when the craving for consumption is left unsatisfied.