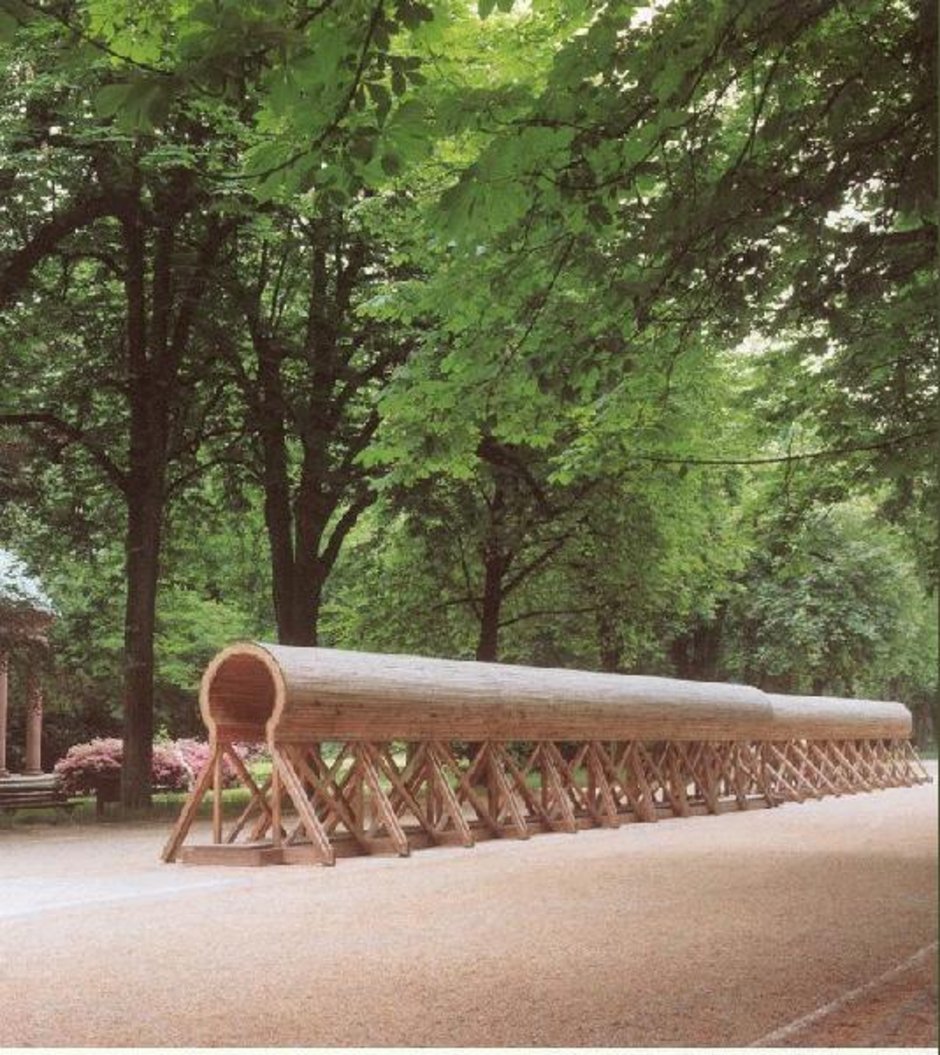 Originally, Bury created the 36 m long wood construction for the gardens of the Vorgebirgspark in Cologne where it was set up in 2000. The location within the well-groomed garden with its extremely long rectangular lawn, the strictly arranged axes of trees and the path that escapes through openings in the hedges into the neighbouring gardens has had a strong influence on the construction. Even the height of the "Gehörgang" ("Auditory Canal") is matched to the height of the hedges (and naturally to the height of a standing person). The parallel arrangement of the two seemingly identical, slightly shifted tunnels plays a major role. As Gerhard Kolberg explains, the sculptural architecture that may be inspected by foot looked at from the front seems "like a straight rhythmical singular object. A few steps aside its duplicity becomes visible while from close up the masterly craftsmanship of the carpenters of Cologne become an aesthetic experience." Associations to a rose trellis come to mind, images of urban pergolas, half-timbering and roofed over historic bridge constructions.

The transfer to the Brunnenallee (alley of the springs) that was created by Peter Joseph Lenné for the Kurpark in Bad Homburg enhances the function that Bury had had in mind: a free standing sculpture that can be walked through. The historical axial mosaic in the center of the cobble stone alley seems like an infinite catwalk on which the legs of the "Auditory Canal" construction seem to continue like a viaduct in one direction towards the Siamese Temples and towards the Kurpark's Obelisk in the other. The immediate proximity of the landscape garden suggests the comparison to the functional buildings that Bury's "Auditory Canal" at the same time denies.

In passing through the corridor the head of the traveler reaches the circular, vaulted upper part of the tunnel. His eye is basically directed along the course of the corridor. Not the focusing of an object but the aiming of the sight is intended – we are brought closer to a clipping of the topography by walking through the "telescope". Furthermore, the artist enhances the aesthetic perception and sensual experience of the space by an irritation of orientation: by their diagonal position on the park alley, each element of the sculpture claims its spatial and formal independence from the axial structure of the rest of the gardens. The arcades are not strictly parallel to each other, but slightly shifted. "One is reminded," explains Kolberg, "of the contra-rotating strokes of the two sides of an ancient galley (or to the movement of a centipede), where the construction of structured ribs and dynamically horizontal plank boards suggests that of a boathouse.

On the other hand, the external prop beams that almost reach the edge of the alley propose a kinship with the structural engineering of Gothic cathedrals ... The linking with Gothic architecture fits to the association of the work with a place for contemplation, meditation and orientation. During his passage through the shadowy vaults, shielded from the external world by the perspective of the planks aligning into the depth, ... the observer has to rely on his five senses. Especially the ear is sensitized, in order to compensate the limitation of the sight and not to lose contact to the external world. In listening the observer will become aware of the sound of his own footsteps echoing in the vault, which transforms the architectural sculpture into the 'Auditory Canal'."