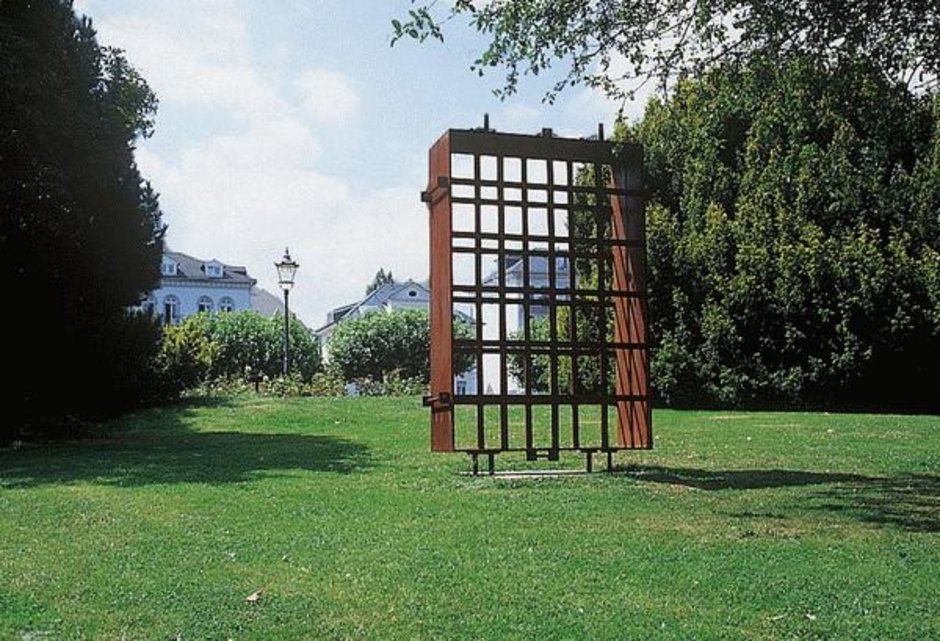 If you turn from the middle of the square called –Schmuckplatz" downhill towards the Kurpark, you will come across a cage-like, oversized case under the shade of a willowy tree. It is not a transparent cabine that can be entered, as was the case in "Blickachsen 2/Axes of View 2", ("Vier Möglichkeiten/Four Possibilities"), which provokes an associative-intellectual reaction" (Uwe Rüth). In this previous work, the expressions were engraved above the doors, with the choice to enter under that portent. It referred to the juice of life and the sense of taste, emotion and the behaviour of consumption.

This new work deals with a porous, narrow steel box, which is patterned by a grating on the front and backsides of it in equally sized squares (24 fields per side). On each of the points intersecting points, linguistically over-stylised French expressions are engraved in the horizontal rods (15 per side), which could well stem from a textbook on psychological behaviour. The words on the front and back exactly correspond to each other. They result in the syntax of pairs of expressions such as "Philogeniture" (love of children) and "Configuration" (design), "Vénération" (respect) and "Calcul" (calculation). There is no obvious connection between the words on the front and the back or indeed between neighbouring expressions, but such consecrated words that are more intensive as any everyday language appeal to memory and longevity.

"Just like the on the gable of the monuments or on a gravestone, the inscription raises the claim to have the final say" (Daniel Abadie). Each of the contradictory expression couplings, leadings to a "Babylonic" confusion of expressions, which only then obviously arises, when reason is replaced by feelings and love (Amativite).

The visitor who enters the gardens longing for beauty and quiet, distance and light, is thus thrust unsuspectingly into an uncomfortable position. The unshakeable object of Plensa’s presents, instead, the "cage" of feelings. Despite its openness, it is similar to a "sell in a monastery" (according to Lorand Hegyi) or perhaps even more so, a prison, in which people who are governed by urges and desires are delivered their own ideas, imaginings, fictions and memories.