The German artist Kati Heck, who lives in Antwerp, is known above all as a painter. In her monumental paintings, realistically portrayed figures and expressive pictorial gestures are combined with fantastical, graphic or comic-strip elements – frequently depicting people in the form of sausages or cucumbers. These richly allusive creations are – like the artist’s sculptural works – often based on filmed ‘happenings’. For example, following a stay in Austria, Heck made ‘sausage costumes’ for herself and her friends and performed a ‘sausage fight’, which she filmed – and on which the stunning installation “Taking part is everything” is based. This work was created for Art Cologne – as a commentary on the art world. In “Blickachsen 10” the installation, consisting of three comic-figure sausages with faces, can be seen at the Kurpark pond in Bad Homburg: a giant white sausage hangs from a tree while two other sausages are lying on an island in the pond – one of them is cut in half and has lost an eye, which is floating on the water. The absurdity and brutality of this scene is summed up by Kati Heck as she laconically declares: “It’s the war of the sausages.” 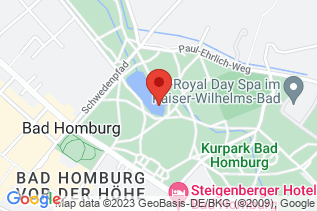